Purple Trainwreck is a well-balanced 50/50 Indica and Sativa hybrid, which is a descendant of Trainwreck and Mendocino Purps. Despite having the nickname “Granddaddy Wreck,” it does not turn the user into an awful mess. Quite the contrary, this aesthetically beautiful and fragrant strain is a source of feel-good sensations that many recreational and medical users love.

The plain sight of Purple Trainwreck immediately captures the attention and sparks a desire to examine the strain even further. Consumers will be enthralled by the variant’s buds which are forest green with striking colors of deep purple and red undertones. The same shades are also reflected in its foliage. Nonetheless, one of its best characteristics are the speckles of sugary resin that enfold the colas.

As the plant matures, it grows into a shape akin to small pine trees, albeit with large, dense, and resinous nugs that bunch up in clusters.

The overwhelming scent of grape, citrus, lavender, and pine embraces the nostrils as soon as the jar is opened. Along with the terpenoid pinene, the strain also inherited the unusual yet delightful combination of flavors from its source landraces – mainly, berry, citrus, and spice. The thick smoke also leaves a pleasant herbal and sweet aftertaste which lingers on the tongue.

Purple Trainwreck’s cerebral buzz hails from its parent Trainwreck, while Mendocino Purps should be thanked for its satisfying physical benefits. Such well-balanced effects make the variant a persistent favorite by many users. Moreover, aside from its cannabinoid content, the strain is also high in pinene, further boosting its health-giving capacity.

Purple Trainwreck is an energy-giving variety. When taken in small doses, bursts of euphoria, chattiness, and laughter that last for about an hour are initially experienced. This is also accompanied by a gush of creativity which is good for users who want to take on artistic projects.

This revitalizing effect is balanced out by a sense of calm and serenity after the definite time interval. However, at higher levels, this quickly downgrades into a lethargic feeling. Nonetheless, this effect can still be beneficial for seasoned users in search of potent strains to zone out.

When planning for a sesh with Purple Trainwreck, don’t forget to prepare some healthy snacks, as sudden hunger is sure to occur in the middle of consuming this munchies-inducing strain.

The type of euphoria brought about by Purple Trainwreck battles with day-to-day stressors and worries, which is advantageous for anxiety and depressive patients. The hybrid is also a known analgesic with long-lasting effects that eases pain of sorts – particularly, migraine, back pain, and body cramps.

It also acts as a sedative which is helpful for insomniacs who have long been yearning to catch some well-deserved Zs. These prolonged effects are felt even as the user gets up from bed, extending sensations of symptom relief. It can even be anyone’s go-to strain the morning after a fun night out as it also eases hangovers.

In addition, this cannabis variant is a safer treatment alternative for multiple sclerosis (MS) considering the side effects of the available conventional remedy of the ailment. Some of which include weight gain, high blood pressure, endocrine dysfunction, and infections. Many medical users also reported Purple Trainwreck’s efficacy in mitigating the symptoms of glaucoma, epilepsy, lupus, and cancer.

However, this versatile variant is not without flaws. As such, users may experience a few minor issues like dry mouth and eyes and drowsiness. In excess, it may also arouse panic in anxiety patients and encourage paranoid thoughts.

Purple Trainwreck is easy to grow and do well in various conditions, giving both indoor and outdoor growers a shot at cultivating the variant. Outside, it grows at almost any condition as long as the frosty season is over. Although, it flourishes best in a rich base at warm, dry, and sunny Mediterranean climates. The slightly lower temperatures in October alter the bud’s tint, transforming certain parts of the calyxes into a beautiful magenta shade.

Meanwhile, it only entails an adequate growing space and ample nutrients when reared inside grow rooms. Many growers, especially novices, also admire the hybrid for being forgiving to minor mistakes. It is also genetically robust to withstand slight mechanical damages as well as pesky pests, molds, diseases.

However, the strain stretches particularly tall, with a full height of approximately 2.5 to 5 meters. For this reason, it must be trained to prevent it from growing too close to the source of illumination and experience light burn.

As if the aforementioned traits of the plant is not enough, Purple Trainwreck is also a high-yielding variety. It can produce up to 500 g/m of harvest indoors. On the other hand, a generous return of approximately 700-900 g/plant can be reaped at outdoor gardens. Considering such rewards if the growing process is done right, waiting for a period of 10 to 12 weeks is worthwhile.

Purple Trainwreck, with its beautiful magenta hues and a heavy coating of pearly trichomes, captivates the consumer at first glance. But apart from its gorgeous visuals, its tropical mix of flavors and fragrances also contribute to its sterling reputation.

Moreover, the bliss and calm it provides are cherished by leisure smokers, while its impressive catalog of health benefits makes it a consistent top pick by many patients. Finally, due to its undemanding growing necessities and abundant harvests, it is an easy choice even for rookie growers. 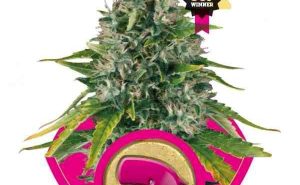