Royal Moby is a classic Spanish feminized seed that is spiced up with Dutch genetics. This 65% Sativa-dominant hybrid is created from only the finest lineage: Haze and White Widow. Being a close relative of the extra potent Moby Dick, Royal Moby, just like the gigantic marine mammal from Herman Melville’s tale, is enormous in terms of bud size, cannabinoid content, and yield.

Royal Moby features classic green buds as well as leaves that are hued with medium to bright green. Its calyxes are also glamorously adorned with orange pistils. However, its crowning glory is its resinous head brimming with frosty trichomes.

During the flowering stage, the plant grows big and tall. It has a robust structure, slender appearance, average internodal distance, and long, stretchy branches. It also develops succulent buds that bloom in clusters.

Royal Moby’s fragrance and flavor take the smoking experience to a different level. It has a scent that radiates a mix of floral and fruity notes. Reflecting its whale-inspired moniker is also a huge, thick smoke that exudes long-lasting flavors that are mild yet detectable. Particularly, it delivers a gentle, honey-like sweetness that is pleasantly counteracted with a bit of earth and spice.

While it is 35% Indica, Royal Moby’s effects chiefly resemble a pure Sativa. The strain is also more of a leisure variety due to its powerful buzz. However, apart from its psychedelic effects, it can also be an efficient remedy for various health issues.

Even upon the first few puffs, Royal Moby’s high can be felt almost immediately. The euphoria arouses creativity and motivation, which can be ideal for anyone who wants to improve their work performance or engage in any artistic pursuits. It is also great for those who want to get an extra punch during the day as it does increase the energy level and positively affect one’s disposition.

Royal Moby is deemed as one of the most powerful THC-filled cannabis varieties. For the same reason, it is sought-after by many consumers. Despite the potency, however, it does not impact the ability to think clearly and make rational decisions. The cerebral effect is also partnered with a soothing body high that will not lock you on the couch. So if you want to experience gratifying sensations and still be able to function well throughout the day, Royal Moby is the strain for you!

Despite the strain’s cerebral power, it does not trigger anxiety or paranoia. Instead, it eases the said mental issues including depression. While it is also short on CBD, the variant’s high THC concentration provides relief to body aches such as headache, stomach pain, and fatigue, among others.

With a reputation for inducing the munchies, Royal Moby can also remedy eating disorders. Many medical users also consume the strain as a treatment for nausea and glaucoma. However, considering its prevailing energy-giving benefits, this strain should not be taken before bed.

Royal Moby can be reared indoors and outdoors. However, the strain prefers outdoor conditions more. Specifically, it flourishes in tropical, Mediterranean-like climates where the strain is guaranteed to be provided with plenty of sunlight.

Being a Sativa-dominant variety, the strain also assumes a towering height at full maturation, which can be a disadvantage for cultivators with space limits. It stretches up to two meters tall indoors. Hence, aspiring indoor growers should prepare a growing space that can cater to the herb’s stature.

On the other hand, it reaches to a maximum of 3 meters outdoors. For this reason, Royal Moby also requires a lot of nutrients. There is no technique though that will keep this plant from soaring to its potential height – even if grown under artificial lighting. However, the Screen of Green (ScrOG) is an excellent method to take advantage of the strain’s lofty build.

While its height leans more on Royal Moby’s Sativa genetics, the plant’s 9 to 10-week flowering period is suggestive of its Indica lineage. With sufficient care and proper techniques, the crop can yield between 500-600 g/m2or 75 g/plant under a 600W light indoors. Meanwhile, a colossal harvest of about 600-1000 g/m2can be acquired when the strain is furnished with adequate sustenance and grown in optimal conditions outdoors.

Compared to greenhouse-grown crops, Royal Moby tends to ripen longer outdoors. In which case, be ready to reap out the fruits of your labor by October.

With gigantic features and effects that assure a regal cannabis experience, Royal Moby truly earned its name. The strain gives off a dense smoke that engulfs the senses with a lovely mellow scent and flavor. Its enormous fumes also supply the body with energy.

In the majority of its characteristics, the plant’s Sativa genetics exert dominance over its Indica lineage. For one, the strain exhibits a tall stature just like a pure Sativa variant. Its effects are also more revitalizing than calming.

Furthermore, while the variant’s flowering period lasts longer than most strains, it has the most massive harvest. Therefore, for growers who can allocate a substantial space and have enough patience to wait for a quite lengthy interval towards the harvest season, I assure you that Royal Moby is 100% worth it. 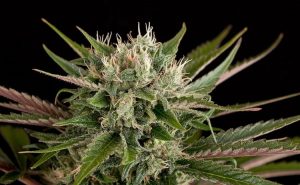