MENUMENU
Home » All articles » Magazine » How Long does Marijuana Stay in the Body?

When you take marijuana, it is metabolized in the body and its active ingredient, THC, is the one that stays in our system. THC binds with our body’s fat cells and it stays there, that’s why the drug tests used to detect marijuana use looks for the presence of THC in the body.

The Potency of the Marijuana You are Using

The marijuana’s potency can cause a big effect on the length of time marijuana stays in your body. This is because the more potent the marijuana you are taking, the more THC or tetrahydrocannabinol is in it. Meaning, if it is more potent, you are putting and storing more THC into your body.

THC is the chemical ingredient of marijuana which is responsible for its most wanted effects – the feeling of being high or the stoned effect. When THC is taken into the body, it is absorbed quickly by the fat tissues and different organs in the body. According to some people, the marijuana that people are using today is even more potent than it was decades ago.

How Often and How Much do You Smoke Marijuana?

The more you ingest or smoke weed, then you introduce even more THC in your body. And as time goes by, the THC will build up in the system and it will make it even harder and longer for you to eliminate them from your body.

As I have said, THC is stored in the body’s fat cells. Those who have a smaller body built can eliminate marijuana more quickly from their body than those who have a larger body size since they have more fat stored.

Your metabolism also plays a big role on how long THC stays in the body. If your body can metabolize faster, this also means you can excrete THC in a much shorter period of time than those who have a slow metabolism.

Physical activity is also an important factor because if you are physically active, this means that you burn more fats and it would make it faster for you to eliminate THC since it will go with the fats. Lately, the tetrahydrocannabinol (THC) industry is on a significant rise. The reason for this is the growing popularity of the … Basically, there are two major marijuana strains. Each strain grows differently, consists of different elements and has various effects on … 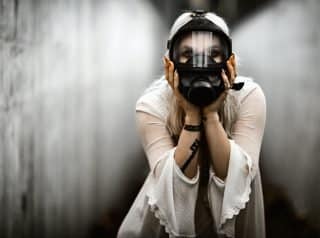 Bong gas masks for weed are materializing on the shelves of head shops. In your mind, you can picture yourself …