The sun is the best source of light for marijuana plants. Not everyone, though, has the luxury of growing outdoors. Thus, the only alternative is to mimic natural sunlight indoors. As you are about to find out, the wattage is merely the tip of the iceberg. There are other factors to consider – the most important being the use of a specific type of bulb appropriate for the growth stage.

Grow lights can be cheap, affordable, or costly, depending on the type. As someone trying to grow marijuana for the first time, you could get away with the least expensive options. It does come at the expense of the overall quality and size of the yield.

Fortunately for you, not only have the prices of grow lights gone down, but they are better than ever. As a matter of fact, the sheer number of brands and products in the market, while outstanding, makes the process of choosing one confusing.

A fundamental understanding of the light spectrum, in this case, reduces the confusion. You also have a better idea of what is needed once you know the different types of lamps and their purpose.

The sun emits energy in the form of solar radiation. Our atmosphere blocks most of this energy, except for 300nm to 1100nm wavelengths that penetrate, reaching the surface.

The natural light that we see occupies a narrow band of the spectrum. What is perceived by the naked eye to be white is actually composed of seven colors from 380nm to 750nm. Each of these colors plays a role in the growth of marijuana plants with blue and red being of utmost importance.

During this period, the priority of the plant is to develop a strong foundation in preparation for reproduction. It is when the branches, stems, and leaves grow. For this to happen, you provide the plants with blue light (400nm to 500nm), in which the rate of photosynthesis will be optimal.

In nature, marijuana plants transition to the flowering stage during late summer to autumn. You can simulate shorter days by switching the light cycle from 18/6 to 12/12. This is also the time when you replace the bulb to one that produces red light (640nm to 680nm).

Over the next weeks, the plants shift their focus from growing branches, stems, and leaves to producing flowers and trichomes. The red light also enhances the secretion of cannabinoids and terpenes, including THC and CBD, by the resin glands.

Types Of Grow Lights You Could Use

Generally, there are three types of grow lights that can sustain the growth of marijuana. You could base your decision on the cost of investment, the highest yield, or the most energy-efficient.

The cheapest option, when growing marijuana, is to use fluorescent light. These are the bulbs and tubes you use in the house. If there is one advantage over other types of lamps, aside from being cheaper, then it is not generating as much heat. Hence, you could position them even under 12 inches from the plant’s upper canopy.

Fluorescent lights can produce fantastic results with clones, seedlings, and young plants. As the marijuana plants approach the mid-vegetative stage and to the flowering stage, its weakness becomes glaring – the plants do not grow as large as those put under HID. Its yield and overall quality are also not on the same level.

As a compromise, what some people do is to switch to HID – HPS or LED – during the flowering stage. Doing so helps improve the quality and increase the yield. In other cases, fluorescent light could also be used to augment HPS/LED grow light. Its purpose, in this case, is to provide illumination in lower areas where the overhead lamp cannot reach.

How do fluorescent lights compare to HID? On average, you can expect around 0.25 grams per watt. An HID or the new generation of LED can provide 2 to 4 times more.

CFL is the most commonly used in practically all households. In some cases, it is the only viable type of lamp that you could use, such as when growing in a small cabinet or cupboard.

Due to its limited wattage, a single CFL can only support one small plant. You do have the option of adding more if you were to grow more than one plant.

T5 fluorescent tubes are easily bought in stores. It is a better choice than CFL because it can provide better coverage. Some people also mount it on a wall, enabling lower parts of plants to receive ample light. Like CFL, it is best suited for growing small plants.

Aside from T5, fluorescent tubes can also be T8 or T12. T5, however, provides more light for the size and is thus preferred. You could also combine T5 with CFL.

HID has, for decades, been the best choice for grow lights. They can help plants attain their full potential – in quality and yields. To give you an idea, using this type of lamp can give you 0.5 to 1 gram per watt. During day to day use, it is somewhat easier, requiring fewer adjustments on its distance to the plants compared to fluorescent and LED lights.

These bulbs, though, do cost more. Furthermore, it requires another piece of equipment to work – an electronic ballast. Usually, when you buy a set of this lighting fixture, it also includes a hood reflector. Because it comes with high wattage, not only does it consume more electricity, but it also produces a lot of heat. Hence, you would also need to invest in an exhaust fan to expel warm air from the grow room.

MH lamps contain a mixture of gaseous mercury and metal halides like thallium or thorium in which an electric current passes through. It produces a bluish-white light that is perfectly suitable for the vegetative stage. Plants that are grown under this type of bulb tend to grow at a faster rate, preparing it better to produce flowers.

If you have a decent space, enough to plant 4 to 6 plants at a time, then it would be best for you to use an MH bulb. Compared to fluorescent lamps, they cost more. It more than makes up by making it possible for the plants to develop strong, sturdy stems, branches, and leaves. Also, they usually last 10,000 hours (400 days).

In the outdoors, street lamps need to be bright, and HPS is commonly used – they are that powerful. In many ways, it is similar to MH, except that it uses sodium, mercury, and xenon in an arc tube. The use of sodium produces orange-red wavelengths, making it suitable for use during the flowering stage.

HPS bulbs need a lot of electricity, but it uses energy efficiently. It does require an efficient cooling system to vent out hot air, thus preventing heat stress of light burn. Also, this bulb usually provides 18,000 hours of peak performance before declining in efficiency gradually.

Not many people use CMH, let alone even heard about it. It is a newcomer in the grow light scene but has steadily gained recognition. It uses a ceramic composite arc tube, and one of the ways it is better than both MH and HPS is that it could produce plasma-light light. More importantly, it has a broad wavelength allowing its use in the vegetative or the flowering stage.

Unlike MH and HPS, CMB bulbs do not produce as much heat. It still requires the use of an exhaust fan. This type of lamp is expensive but has a long service lifespan of 3 years.

Since the late 60s, LED has gradually but surely taken the market by storm. It is only in recent years that companies started making LED grow lights for plants. Seeing its advantages, many in the cannabis scene have switched to this energy-efficient lamp.

LED grow lights do not produce much heat. That, in itself, should be more than enough reason to choose this type of lamp instead of HIDs. It has a broad spectrum, thus allowing you to use one fixture during vegetative and flowering periods. Meters and Dosers For Cannabis Growing 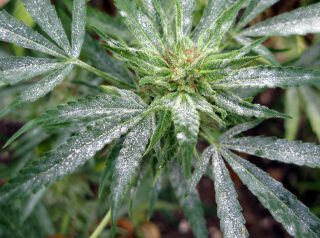